The word cannabinoid refers to every chemical substance, regardless of structure or origin, that joins the cannabinoid receptors of the body and brain and that have similar effects to those produced by the Cannabis Sativa plant.1

The three types of cannabinoids that people use are recreational, medicinal and synthetic.

Research has found that the cannabis plant produces between 80 and 100 cannabinoids and about 300 non-cannabinoid chemicals.1 The two main cannabinoids are delta-9-tetrahydrocannabinol (THC) and cannabidiol (CBD).

The most commonly known of the two is delta-9-tetrahydrocannabinol (THC), which is the chemical that is responsible for the psychoactive effects of cannabis.2

The main difference between the two cannabinoids is that THC has strong psychoactive effects, meaning it makes a person ‘high’, whereas CBD is thought to have an anti-psychoactive effect that controls or moderates the ‘high’ caused by the THC. CBD is also thought to reduce some of the other negative effects that people can experience from THC, such as anxiety.3 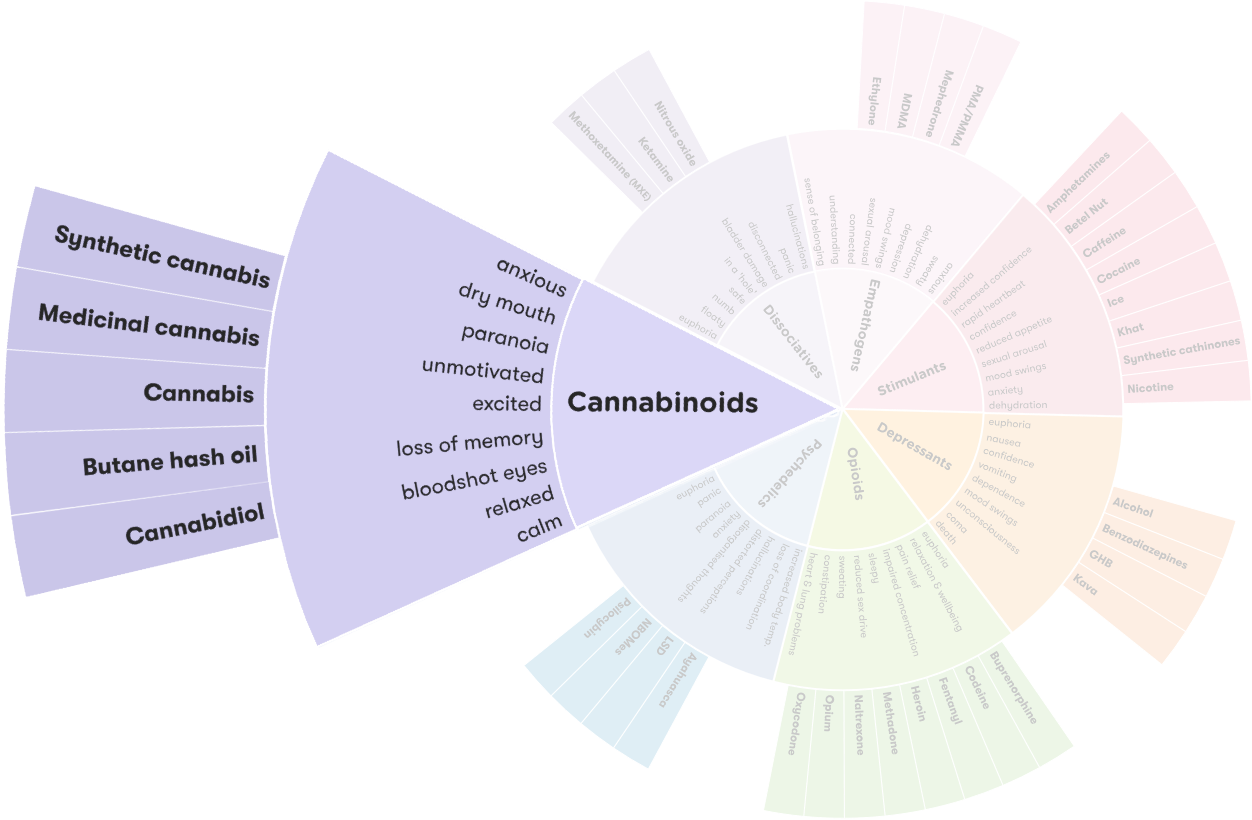 The endocannabinoid system is a unique communications system found in the brain and body that affects many important functions.4

It’s made up of natural molecules known as cannabinoids, and the pathways they interact with. Together, these parts work to regulate a number of activities, including mood, memory, sleep and appetite.3

What do cannabinoids do?

Cannabinoids come in many different forms, including:

Illicit and synthetic cannabinoids are usually smoked, vaporised or eaten. Pharmaceutical or medicinal cannabinoids come in a variety of products including raw (botanical) cannabis which may be vaporised for medicinal purposes, as well as oils, liquids and oral sprays. Gels have also been developed for direct application to the skin.4

The effects of cannabis may be felt immediately if smoked or vaporised, or within an hour or two if eaten. General effects may include:

What are synthetic cannabinoids?

Over the years a number of synthetic cannabinoid products have been produced. They are similar to those of natural cannabis, but these drugs can be more potent and have been associated with a number of adverse effects.10

Many of these substances have developed to the extent that they no longer fit with the traditional cannabinoid classification system.10

Cannabinoids and other drugs

The effects of mixing cannabis with other drugs, including alcohol, prescription medications and over-the-counter medicines, are often unpredictable.

Using alcohol and cannabis at the same time can increase the unpleasant effects, including nausea, vomiting and feelings of panic, anxiety and paranoia.

Some people use cannabinoids to ‘come down’ from stimulants such as amphetamines and ecstasy. The mixing of cannabis and ecstasy has been linked to reduced motivation, impaired memory and mental health problems.11

Use of cannabinoids is likely to be more dangerous when:

If your use of cannabinoids is affecting your health, family, relationships, work, school, financial or other life situations, or you’re concerned about a loved one, you can find help and support.