Richmond has a long tradition of community activism, too – one that stretches back to the Great Depression, and when residents banded together to support the unemployed and their families.

Pictured above is long-time resident and community activist, Margot Foster, in her front yard. While Richmond is a lively place, Margot has a different story to tell about the reality of life in the suburb's north.

Margot says one of the main thoroughfares, Victoria Street, is like a “sea of misery”. Margot believes a medically supervised injecting centre (MSIC) will improve the lives of people who use drugs and residents.

Margot and other activists are playing a pivotal role in driving support for an Medically Supervised Injecting Centre in North Richmond - a pragmatic, compassionate approach for connecting people who inject drugs with health services, and reducing harms in the wider community.

Overdoses in the streets of North Richmond

The North Richmond Community Health Centre reports that, between 2011 and 2015, the number of overdose deaths increased from three to 59 – with many more people lucky to survive. And in just the first six months of this year, centre workers reported helping 37 people who ehave overdosed on heroin.1 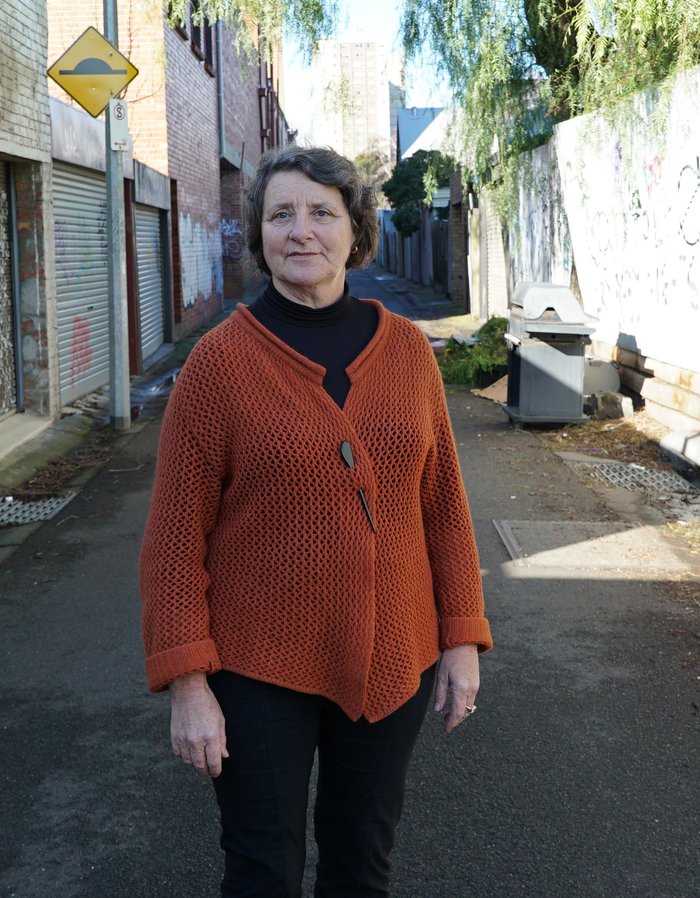 Margot, pictured right in an alleyway near her home, says she can’t walk around her neighbourhood without seeing uncapped syringes, and often people in distress.

Margot's desire for community action is telling. Evidence suggests more people in North Richmond will be found unconscious in the streets and risk death. More unsuspecting children will be exposed to used needles and syringes as well.

Businesses will struggle as fewer people visit streets where heroin is openly sold and used in public. And more people will mourn the avoidable deaths of friends and family.

Is this the future we want for the people of Richmond and those dependent on heroin?

Acting local, thinking global: successes from MSICs across the world

There are a number of MSICs located across the world. The majority of these injecting centres are located in Europe, but most studies explore centres in Vancouver and Sydney.2

Here in Australia, Sydney’s Medically Supervised Injecting Centre (MSIC) has been operational since May 2001. Fourteen years later in May 2015, the supervised injecting centre had successfully managed almost 6,000 opioid overdoses.3 The centre has also contributed to ambulance call outs to King’s Cross falling by 80%,4 and the number of publicly discarded needles and syringes almost halving.

And for those with an eye to the economics as well as the human impact, Sydney’s MSIC produces greater financial savings than it costs to run.5

There are similar successes overseas.6 In Vancouver, Canada, the Insite supervised injection facility has been running since 2003. Researchers found that after its introduction, there was a 35% fall in overdose deaths within 500m.7 The facility has not led to increased public disorder, crime, or drug use, either.8

Insite’s success has helped drive funding for three additional supervised injection sites in Toronto and one in Ottawa.9

But supervised injection facilities are not just about reducing the immediate harms associated with heroin and other drug dependency. Facilities in Canada and Europe have demonstrated clear benefits for the broader community too.

In 2010, researchers estimated that the Insite facility was associated with cost savings10 of more than six million Canadian dollars. While only an estimate, the research demonstrated that the facility helped the community save money on treatment for health issues like HIV infection.

And the benefits of medically supervised injecting centres don’t stop there.

Many women experience violence within intimate relationships where both partners use drugs.11 Women from North America reported feeling safer from violence and having greater control over drug consumption when accessing a supervised injection facility.12

In Frankfurt, Germany, people reported experiencing feelings of respite when accessing a facility for injecting drugs.13

And back again to Vancouver, the evidence also suggests that regular use of a supervised injection facility does not negatively impact a person’s efforts to find employment.14 Facilities may in fact be an opportunity for the provision of specialised employment programs.

A different vision for the streets of North Richmond

We know supervised injection facilities not only work by saving lives; they can also help sustain communities by reducing the financial pressure on local health services, and they can challenge a culture of violence and stigma.

A community with more people managing their drug dependency (including opportunities to cease their drug taking), one that enables better use of health services, and one that allows people to feel valued and safe, is a sustainable and inclusive community.

This is a community where people will still want to raise families, shop for great food and clothes, and go to see live music and be with their friends.

By supporting the need for an MSIC in North Richmond, Margot and other activists are helping make the future of their community bright.

Sydney, Vancouver, Frankfurt and many other cities have learnt the benefits of supervised injection facilities. How long will it be before Melbourne and the rest of Australia does too?

Other articles about advocacy