Note: Drugs sold as MDMA (ecstasy) may not contain any methylenedioxymethamphetamine (MDMA); they can be a mix of amphetamine, paramethoxyamphetamine (PMA), ketamine, NBOMe, synthetic cathinones or other substances.

(MDMA) Methylenedioxymethamphetamine is an empathogen, which increases an individual’s feeling of empathy and kindness,  and increases feelings of being socially accepted by and connected to others1.

MDMA is commonly known as ecstasy.2 However, some pills sold as ecstasy may only have a small amount of MDMA or none at all. Other drugs and ‘fillers’ are often used instead. This makes it hard to know what reactions to expect after taking MDMA or if negative side effects will be experienced.

MDMA is commonly found in tablet or capsule form but can also be a powder or crystal. The pills come in different colours and sizes and often have a picture, symbol or logo. When sold in pill form, two pills with the same logo or symbol may have different effects — they can come from different sources and have different ingredients.

How is MDMA used?

MDMA is usually swallowed but can also be injected, snorted or inserted rectally.2

MDMA affects everyone differently, based on:

The effects of MDMA are usually felt about 20 minutes to an hour after it’s taken and last for around three to four hours.2, 3 The height of this experience is sometimes known as ‘peaking’.2

If you take a large amount or have a strong batch of MDMA, you may also experience:

MDMA is taken by some people at festivals, parties, and nightclubs. In these environments, people using MDMA are likely to engage in dancing, which in combination with MDMA can raise body temperature to a dangerous level.6

It is important people take regular breaks to cool down and drink around 250-500ml of water per hour.

Drugs that affect a person’s mental state (psychoactive drugs) can also have varied effects depending on a person’s mood (often called the ‘set’) or the environment they are in (the ‘setting’):

In the days after MDMA use, you may experience:

The use of depressant drugs such as alcohol, benzodiazepines or cannabis to help with these ‘come down’ effects, may result in dependence on both types of drugs.

Regular use of MDMA may cause:

Mixing MDMA with other drugs

The effects of taking MDMA with other drugs − including over-the-counter or prescribed medications − can be unpredictable and dangerous:

MDMA + alcohol: increased risk of dehydration and consequently drinking too much water.8

MDMA + ice, speed or cocaine: increased risk of anxiety and reduced brain functioning due to dopamine depletion. Enormous strain on the cardiovascular system and other parts of the body, which can lead to stroke.9,10

‘Polydrug use’ is a term for the use of more than one drug or type of drug at the same time or one after another.[1] Polydrug use can involve both illicit drugs and legal substances, such as alcohol and medications.

Giving up MDMA after a long time is challenging because the body has to get used to functioning without it. Withdrawal symptoms should settle down after a week and will mostly disappear after a month. Symptoms include:

If your use of MDMA is affecting your health, family, relationships, work, school, financial or other life situations, or you’re concerned about a loved one, you can find help and support.

Call 1300 85 85 84 to speak to a real person and your questions answered as well as advice on practical ‘next steps’. It’s confidential too. 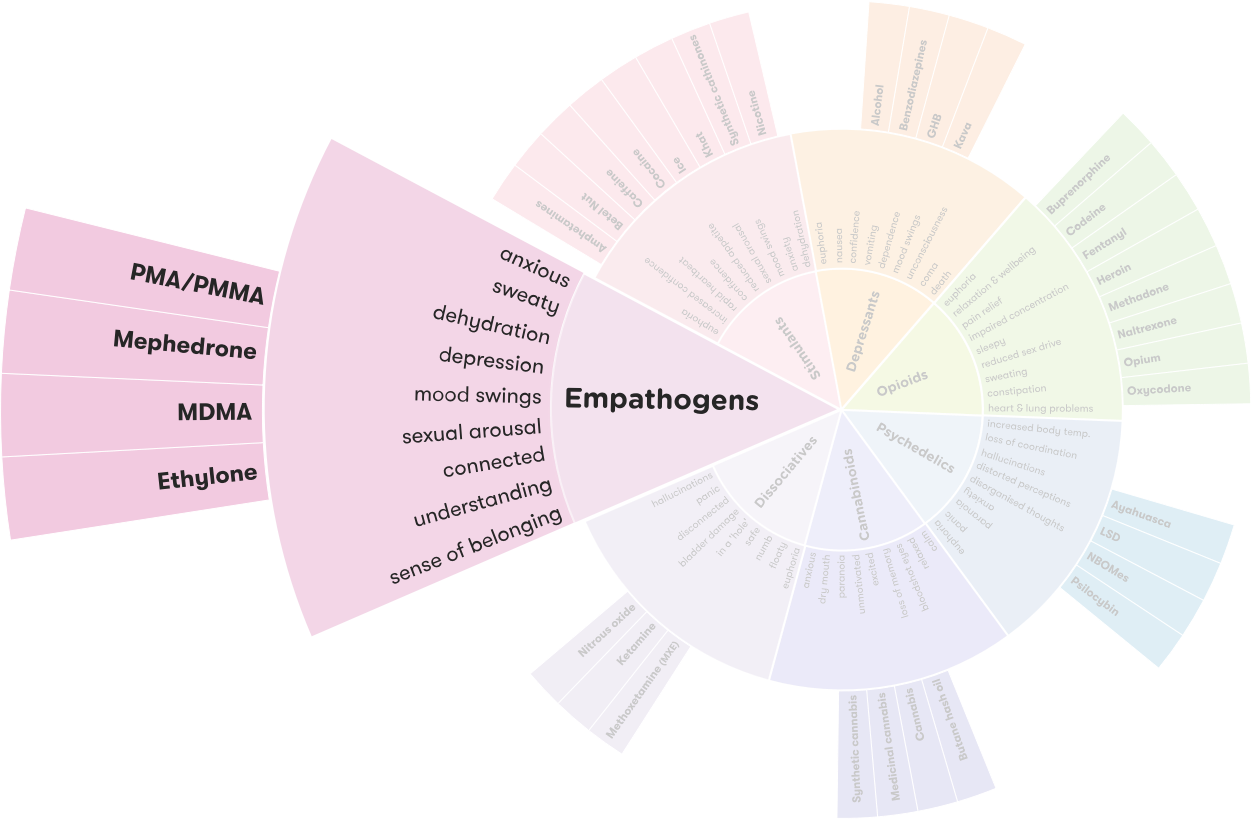